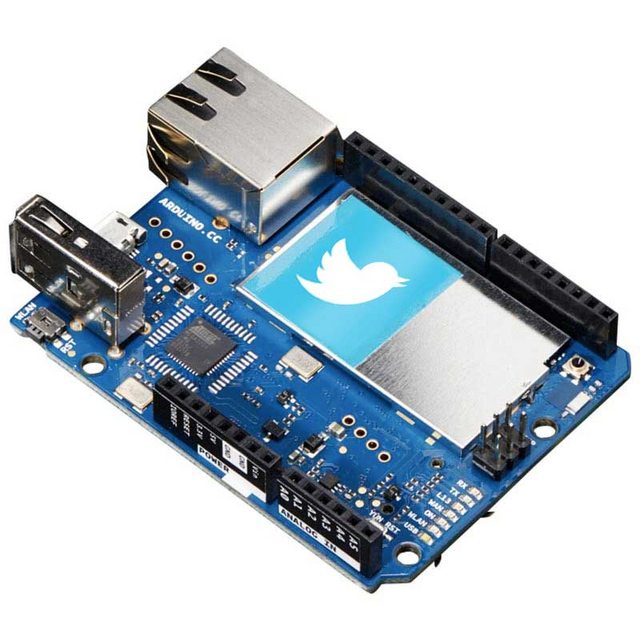 i.e. when a tweet containing a specific #hashtag is twitted, Arduino blinks an LED

I love this experiment because it’s near real time and it gives a lot of possibilities, and it’s very easy to set up

“I love instructions, they give me confidence.”
– me

In this post we’ll learn how Ruby objects are mapped in JavaScript-land by the Opal compiler, how to call methods on them and how object instantiation works for both Ruby and JavaScript.

The rule by which Ruby objects are compiled into JavaScript by Opal is quite simple. Constants are registered with their regular name under the window.Opal (i.e. the Opal property on the JavaScript window object). Methods are mapped to properties prefixed by a $ (dollar sign). Instance variables are just regular properties.

can be used from JavaScript in this way:

As a Ruby developer you may be surprised that obj.baz returns undefined and not nil (actually window.Opal.nil) as that’s the value that you would expect to find while reading an instance variable for the first time.

What happens is that the Opal compiler will do just that, as long as you access those instance variables from Ruby code. In fact it statically analyzes the class’ code and pre-initializes to nil any instance variable for which it can find a reference.

Now that we have the basics let’s go further and put Foo.new under the microscope for both Opal and CRuby.

The birth of an object in 3 steps

By looking in detail how object instantiation is done in JavaScript by the Opal compiled code we’ll have a chance to learn how it actually works in CRuby.

The implementation of .new

At the cost of oversimplifying here’s the rough implementation of the #new method available to all classes in Ruby:

Breaking it down we see that:

Here’s how it looks in Opal (the code inside %x{} is JavaScript):

As you can see the the only notable difference is in how the block is passed. Opal will store any block call on the method itself under the $$p property. This way blocks can’t be confused with regular arguments. Apart from that it’s clear that it’s fundamentally the same code.

The curious reader at this point is wondering what the allocate method does in JavaScript because surely it can’t manage memory. Let’s see the implementation:

Let’s break it down by line, but this time we’ll go in reverse order:

For those not very familiar with JavaScript I’ll show how objects are usually created:

The awesome thing to me is that Opal manages to have an implementation that is really idiomatic in both Ruby and JavaScript.

I always wanted to learn D3.js, problem is JavaScript is too awesome and that kept turning me off… till now!

Let’s take a random tutorial that we will attempt to translate into Ruby, for example this: http://bl.ocks.org/mbostock/3883245.

A couple of thing we need to bear in mind are these: D3 is not object-oriented and it’s a pretty complex library. We’re expecting some problems.

To have something to compare it to we may note, for example, that JQuery is basically a class ($) that exposes methods that returns other instances of the same class. That makes things easy enough when we try to use it from an OO language like Ruby.

Part I — The Setup

As you probably have noted we added a couple of libraries from the Opal CDN.

First we added opal.js, that is the runtime and core library that are necessary to run code compiled with Opal.

Then there’s native.js that we’ll use to interact with native objects (more details in this other post).

And last we have opal-parser.js and app.rb (that is declared as type="text/ruby"). The parser will look for all script tags marked as text/ruby and will load, parse and run them.

In additon we’re also providing a data.tsv file as described in the tutorial.

About the process of translating

The approach I used to translate this code is quite simple, I copy/pasted all the JavaScript from the tutorial into app.rb and commented it out. Then I translated one line (or sentence) at a time tackling errors as they came.

The first thing we need to do is to wrap the d3 global object with Native, so that is ready for Ruby consumption.

Now let’s look at the first chunk of code

By trying to run this code we discover early on that somehow Native is failing to deliver calls via method missing.

The reason is that bridged classes are a kind of their own and turns out that D3 tends to return augmented anonymous functions and arrays. Now both Array and Proc are bridged classes. That means that they are the same as their JS counterparts: Array and Function.

Native will have no effect on bridged classes (no wrapping) and therefore all calls to properties added by D3 will end in calls on undefined.

To solve this we’ll manually expose the methods on those classes, the final code looks like this:

The complete code can be found in this gist.

UPDATE: see the code in action on Ju-Jist, and read about building ju-jist in this article

Let’s hope that in the future the Opal team (me included) will add method missing stubs1 to all bridged classes (instead of just adding them BasicObject).

We probably didn’t learn very much about how to use D3.js, but we discovered a bit of its internals, exposing an interesting style of JavaScript.

One of the biggest problems with Arduino Yún is that the WiFi reset button is embedded on the board, and it’s very difficult to reach. Once you have packed you project in an enclosure, there’s no way to reset the wifi settings, unless the wifi reset button is reachable through a pinhole.

But how does the integrated wifi reset button work? When it’s pressed for more than 5 seconds, Arduino calls a little script: /usr/bin/wifi-reset-and-reboot

So I’ve made a very simple sketch that does exactly the same: it waits for our extra reset button to be pressed for more than 5 seconds, and when it happens it calls the same exact script using the Yún’s Bridge library.

So you can add your extra wifi reset button, and put it where you want!

I Hope it was useful!

At the Codemotion in Milano, I had a chat with Federico Vanzati from Officine Arduino, and he gave me the fantastic idea to try to use a supercheap USB Audio card with Arduino Yún to give to it full audio capabilities with zero effort.

I mean, it’s awesome! It could give me (and hopefully to you) infinite new possibilities! Sound with Arduino with no external libraries or crappy MP3 shields? How great could it be? Now that we have a great Wi-Fi support thanks to the Yún, this was the real missing feature!

I started with buying this sound card (http://www.manhattan-products.com/hi-speed-usb-3-d-sound-adapter)

Then, all I had to do was plug the sound card in, open an ssh session to the yun, and type:

End of the story. Now you have sound support on the Arduino Yún. I only tried MP3 playback, I didn’t try to record some audio yet, but I’ll try soon!

To test it just copy an mp3 audio file (I named it ItCouldWork.mp3) in the root folder, or, even better, in the SD card, then upload this sketch

It’s based on the button example, so you have to connect a pushbutton to the digital Pin 2.

Now, connect the sound card to the speakers and… push the button!

It doesn’t sound too bad, actually the sound quality is good! And the delay is very short! I mean, it’s just the first experiment, we can work on it!

I really hope this will amaze you as it amazed me… I’m superhappy!

Many thanks to my friend and coworker Massimo, that knows Linux better than I know myself.

A step-by-step tutorial by jeko

IMPORTANT: Connect your intel Galileo to the 5V power supply before any other connection or you will damage the board.

During the Rome Maker Faire, I was lucky to get an Intel Galileo. But when I had to use it, it was suddenly clear that it’s not as straightforward as Arduino. I had to resort to desperate measures and do something that really only a very restricted class of noble people do, I had to read the manual.

The getting started guide by Intel really helped, but the problem is that it’s clearly written by engineers, while the Galileo board wants to attract makers, designers, artists and many people that are used to the “tutorial” or “step by step” approach and are not really into manual reading.

I used to be an RTFM fanatic, but I’m getting old, and I have learned to appreciate when people help me, so I’m very happy to contribute and give some help to those in need.

So. You have an Intel Galileo board, a Mac (I assume you have Mac OS X Mavericks installed), and you want to run the very first basic example: the “Blink” sketch from the Arduino examples. Right?

This is what you have to do, straight and easy.